The Sun Belt is off to a better-than-average start in the non-conference. Denver has posted a rare road win, FIU took out George Mason on a neutral court this week, and last night Middle Tennessee romped over UCLA by twenty (!) in Los Angeles. The Raiders are now 3-0 and have two home games this weekend, one of which will be Belmont if their home tourney bracket holds up.

WKU is playing in the ESPN Charleston Classic this weekend. The Tops face Tulsa on ESPN3 tomorrow at 11.30am CT. They will face either LSU or Northwestern on Friday.
Posted by Cort at 10:55 AM

The Bracket Board is happy to be a part of the Mid-Majority's 800 Games Project. Here is my first contribution on #TeamReset and write-up on last night's 52-49 Hilltopper win over Tennessee State.
Posted by Cort at 1:46 PM

I am stacked up today, but a full write-up of tonight's Tennessee State at WKU tilt is forthcoming late tonight or tomorrow morning. It will be the first of several contributions to the Mid-Majority's 800 games project.

If you are not reading over there or following TMM and @800GP on Twitter, please do so. Great fun!
Posted by Cort at 11:49 AM

Enjoy the rapids of this opening full weekend of college hoops! There are 230 games involving DI schools this weekend including 17 Sun Belt games. The WKU Hilltoppers open the season tonight by hosting Saint Joseph's.

TBB will be running the Chickamauga Marathon tomorrow at Fort Oglethorpe, Georgia. Situated just south of Chattanooga, I had hoped to catch a game there. Alas, the Mocs are at Indiana on Saturday.

More on Monday to recap the Sun Belt weekend and look toward that night's Tennessee State at WKU match up.
Posted by Cort at 1:30 PM

It is time for an update on the Mapping College Hoopdom project. A couple of short sessions over the course of the last week was capped by a marathon school-plotting episode last night. My four-year-old and I sat down for a good 1.5 hours and talked through the map while plotting a boatload of teams. His curiosity pulled him westward last night, so we plotted all of the Big Sky teams and all of the teams located in Washington, Oregon, Utah, Arizona, and New Mexico while adding a smattering of other Western teams as well. A random set of other teams from all over Hoopdom were also plotted (which included a strange preoccupation with the state of Iowa).

While I do aim for unbiased assessment when building brackets, it is no secret that I am a "mid-major" fan through and through. So, when the Iowa Preoccupation emerged, my son asked, "Who is your favorite team in Iowa?," I immediately answered with Drake. So, the Bulldogs got the first plot-point in Hawkeye State. His response: "Drake is my favorite team in Iowa, too." Brainwashing. Bias. These are hallmarks of excellent parenting.

This is such an enjoyable DIY project. Our tools include:
--this online map
--the hard copy Blue Ribbon Basketball Yearbook
--hard copy of Rand McNally's Road Atlas
--two sheets of paper from those giant pads you have probably used in workshops at your place of employment
--lots of Crayola markers

College basketball fuels curiosity on so many levels. Engage it. Embrace it. Map it. Drive it. Attend it. The best learning and deeper understanding occur when our passion produces something. Looking at the college hoops map? Good. Creating a college hoops map? Better. Watching the game on TV? Good. Experiencing the game in the arena and adding to the noise and atmosphere in that place? Better.

A four-year-old ponders and plots the Montana Grizzlies. 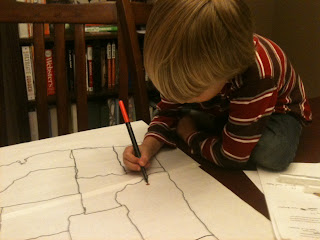 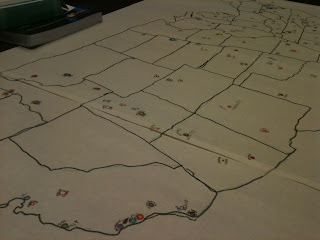 Head of the River

Three games bubble onto the surface tonight and begin the trickle to a full, raging river that awaits us on the weekend. While there are no Sun Belt games tonight, a home state OVC club tips it off this evening: Eastern Kentucky plays at Mississippi State in the Coaches vs. Cancer.

The night's other two games include William & Mary at St. John's (another Coaches vs. Cancer match up) and Valparaiso at Arizona.

Sun Belt action starts on Friday. More on that coming later in the week.
Posted by Cort at 8:41 AM 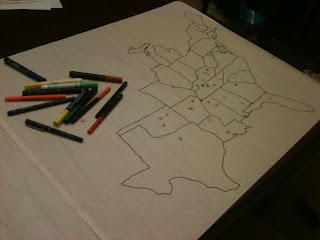 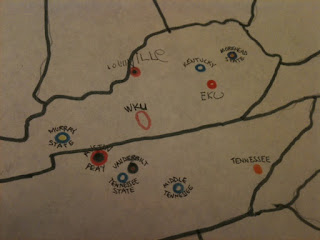 I feel what happens here is becoming less and less relevant. There are so many earnest bracket projections out there, I am not sure that my brackets contribute much in the way of accuracy. But, I was making projections long before I started posting them on a blog, and I would do them for fun anyway. That is how TBB started eight years ago: I began emailing them to some friends and we had fun discussing them. Once the email list grew a bit longer, I stuck them up on Tripod as a central location. If I unplugged today, I would still draw them out in pencil on 8x14 paper just as I did in my youth long before the internet. So, in some ways, I am simply sharing one of my rituals that has been part of my life as a hoops fan for many, many years.

1. No bracket projections until at least New Year's Day. I base projections on results in a given season and nothing else. Until nearly all of the non-conference games are in the books, projections are too much like the popularity polls. Results, regardless of budget or conference or pre-season prognostications or preseason accolades, are all that matter in meaningful projections. This goes for the Lockbox as well. The first one will happen after New Year's Day.

2. This does not mean nothing important happens before January. Quite the opposite. Non-conference games are like the opening chapters to novels, and these first words are vital to the ultimate stories (glorious, mundane, tragic or otherwise) of all members in Hoopdom. I write about those stories from time to time. Also, with two kids under the age five, readers will likely have to endure some daddy-rambling on occasion, but I promise to make those ramblings relevant to the college hoops experience. No posts consisting of a dozen pics of my kids hamming it up with Big Red. However, I do feel drawn to share more about what it means to be a fan of a non-BCS team (WKU Hilltoppers). As I get older, the realities of identity, belonging, community, history, and ritual in "being a fan" of a school become clearer and more important to me. I hope I can share some of that as we go along.

3. Extra attention will be paid to WKU and Sun Belt members, especially before January. Also, non-SEC southern conferences get special treatment (especially the SoCon). History shows that they do not get preferences in the bracket projections, just in the amount of verbiage on TBB.

4. No Kardashians. Crap, just broke that one.

That is enough to serve as a start.
Posted by Cort at 8:51 AM